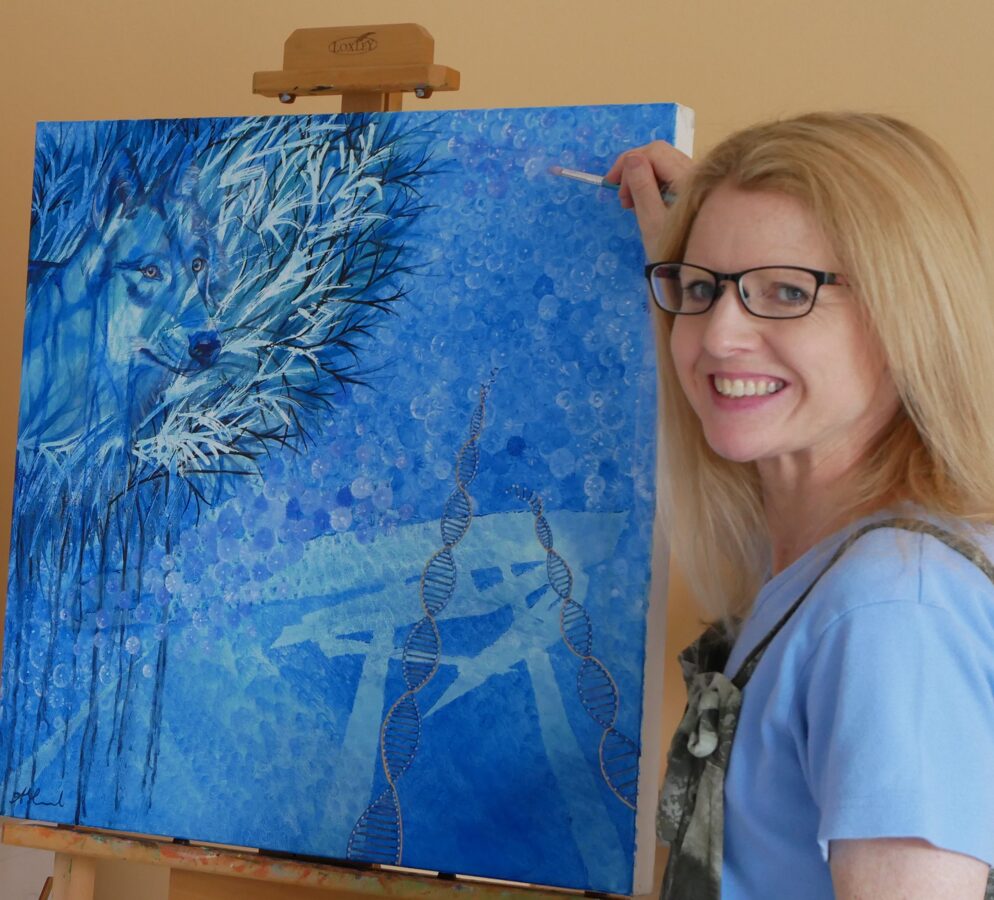 Andrea Grottick was born in Essex in 1975.  Growing up in a large family in an urban area, not far from London, she developed an interest in human relations and how people interact.  As a child, she loved to draw faces of both people and animals and later this developed into a combination of portraiture and an exploration of issues that all people can relate.  She also incorporated animals to represent emotions and different aspects of human nature.

In her younger years, Andrea had a varied career, often working in the field of Mental Health, but also traveling and working abroad as an English as a Foreign Language Teacher and in bars and restaurants.  Between these jobs, she did commissions for portraits and pet portraits, completed a degree in Fine Art (specialising in video art) and held regular exhibitions.

Andrea paints whatever comes to mind about a particular topic of interest.  She says that she used to meticulously draw out the image on canvas first – spending more time on the drawing than anything else, then simply ‘colouring in’ using paint.  Over time, she found this technique to be quite tedious and is now freer in style. She uses oil paint with a medium, such as Sansador, and pours and drips it in multiple layers on the canvas.  She uses fast drying oils, as she finds waiting for conventional oil paints takes away from the joyful spontaneity of her technique.  Andrea’s work is intuitive as she paints from her imagination to start.  There is always a meaning to her work though, a theme or a cause to raise awareness. To make this meaning clearer, she uses photographs to get a detailed portrayal of a person, animal or scene.

Andrea likes to play with the viewers’ perception of what is really going on in the painting.  She will give the painting a seemingly self-explanatory title, but will hide clues in the painting of an alternative meaning.  Similarly, she will add bright, vibrant colours to an otherwise bleak representation or leave large areas uncoloured or neutral to isolate that area from the rest of the image.

Andrea sometimes struggles to articulate what she is feeling, so finds that ‘a picture speaks a thousand words’ is a very good saying for her.  In the past, she has been inspired by her travels – particularly the beautiful scenery, cultures and traditions that she has encountered.  She did a collection of work inspired by the stories from her Karenni refugee students in Thailand.  This was featured in an online art magazine in 2015:  Art Reveal Magazine, Issue 08.

Andrea has also trained as a teacher, specialising in post-compulsory education in Art & Design, she gained her PGCE at the University of South Wales. She designed an art for wellbeing programme for Ben Uri Gallery, London, and contributed essays to the Holocaust Explained website.  She also wrote several blog posts for The Golden Thread Sketchbook and would like to do more writing in the future.

2022  This Zine Has Issues: Sleep and Mental Health (March Issue)

2021 Blogs for The Golden Thread Sketchbook

2012 Content for 'Holocaust Education through the Ben Uri Collection'.

Click here to view the galleries of current and past collections.

Click here to see who Andrea has been collaborating with.